How To Shoot A Crossbow: Quick Tips

1. Cocking the crossbow
The term “cocking” means pulling the string of a crossbow back until it locks into the trigger mechanism and locks into place. It is always necessary to align the string very carefully because a little misalignment can often make the arrow go off target. A person can leave his crossbow cocked for the whole day (provided that the arrow is removed) but the person should always uncock the crossbow at the end of the hunt. This is where a crossbow decocking arrow or decocking target comes in handy.

2. How To Shoot The Crossbow
After cocking comes the next vital part, which is shooting. To load a crossbow place an arrow on the barrel after the string has been cocked. After that, confirm that the arrow is placed properly. When it comes to shooting, all the principles of using a rifle or shooting an arrow from a bow comes into play. When doing the shooting, ensure the crossbow has already been sighted in, zeroed, and is ready for shooting. If not, then you need to sight it before using it. This will provide a solid benchmark at a variety of ranges, normally 10, 20, 30, 40 and 50. This is the perfect way to ensure that the shooting process goes smoothly. 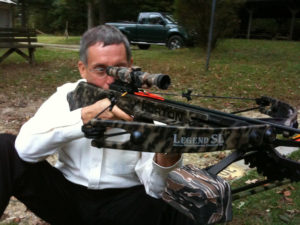 When aiming through a crossbow scope there are several things you will need to know and understand. This includes the scope and how far the crossbow can shoot from a variety of ranges. The crossbow should also be held upright and in a constant position. This will help keep the crossbow steady and make the shot more accurate.

3. How To De-Cock A Crossbow
When the hunt is over, the next step is to uncock the crossbow. It’s helpful to have a special decocking arrow one can fire into the ground without causing any damage to the surroundings or to the bow itself. Often times small decocking targets are used instead. A field point tipped arrow is loaded and fired into the target for fast decocking this way.

Overall, using a crossbow may seem easy, but it does require a generous amount of practice to understand how to shoot it accurately and hunt with it effectively. Learning how to shoot a crossbow effortlessly is key to being able to use it as an effective hunting tool.

The Best Hunting Crossbow: Which Is Best For You?