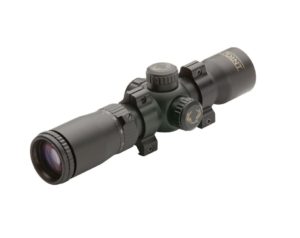 This TenPoint Rangemaster Pro 1.5 Reviews covers details about the scope and it’s overall performance when used crossbow hunting. This 8.25-inch light weight aluminum scope features an easily adjustable velocity and bolt drop-compensation setting for crossbows that fire between 275 and 425 FPS. 3 duplex crosshairs and 5 circles calibrated for 20, 30, 40, 50 and 60 yards (the fourth and fifth circles are unattached, just underneath the 40-yard cross-hair) can be obtained by way of a non-illuminated black mark or one of two rheostat governed, lighted colored dots (red or green). An etched glass reticle and totally multi-coated 1.5 to 5x optics lower the loss of light transmission, while a 30mm tube enhances light-gathering and durability.

One thing we really liked about this scope is the way Tenpoint uses both traditional line reticles combined with dot and circle aiming points. The reticle made target acquisition fast and effortless under a variety of lighting conditions. The scope internals seem well constructed and turning the knobs and reticle adjustments all seem sturdy. Sight in was a breeze with this scope and with other ten point crossbow scope reviews.

Yes, it is, but the illumination is probably the scopes least desirable quality. For one, the light is visible from the opposite end of the scope, so animals can see the light shining. Not good when hunting whitetail deer and other wary game animals. We also found the illumination to be annoyingly bright, even on the lowest setting. It’s bright to the point of flooding out the actual target when aiming in low extremely light conditions. UPDATE: After using a slighly worn battery in the unit we did notice the illumination tamed down a bit on the lowest setting and the brightness washout become less annoying.

What Are The Dimensions Of The TenPoint RangeMaster Pro?

This scope features typical 1-inch tube diam with a 30mm zoom lens diameter. It is 8.25 inches long, and will mount easily on any crossbow with the standard Weaver rails The 15.4-ounce dry weight is about average for a cross-bow scope of this size.

What Is The Zoom Range Of The Rangemaster Pro?

The magnification ranges from 1.5x to 5x and is activated via the zoom ring. It’s important to understand, however, that the zoom function is the same as the FPS setting. So you set it once, before sighting in your crossbow, and then leave it alone. It’s a misleading description that all scope manufacturers use.

How Do The Optics Of The TenPoint RangeMaster Pro 1.5 Reviews Rate Overall?

With the one-inch tube diameter and 30mm lens diameter, this scope features a nice crisp image during all light levels as long as the illumination is off. If it’s dusk or dawn and still a bit dark out, using the illuminated reticle can actually drown out the target because the brightness level does not dial down enough.

Is The Rangemaster Pro Easy To Install And Sight In?

With the one-inch tube diameter and 30mm lens diameter, this scope features a nice crisp image during all light levels as long as the illumination is off. If it’s dusk or dawn and still a bit dark out, using the illuminated reticle can actually drown out the target because the brightness level does not dial down enough.

Is The Rangemaster Pro A Good Crossbow Hunting Scope?

Overall, yes it would be a good choice for hunting whitetail deer, mule deer, elk, boar and about anything else that’s legal to crossbow hunt in your state. It’s built rugged enough to take a beating while still hunting fallen timber or while perched up in a tree stand. 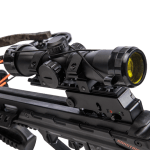