This slender beast can push a 400-grain arrow at speeds tickling the 500 FPS mark and generating 222 FT LBS of kinetic energy. The arrow gets there fast and lets you know it’s there when it hits!

Jump the string? Good luck with that! They’ll have a broadhead in the cage before they even think about it!

How Does The Ravin R500E Crossbow produce such blistering fast arrow speeds?

The proprietary HexCoil Cam System is the culprit! It pushes arrows down the rail in a perfectly straight line each and every shot.

And Ravin’s Frictionless Flight™ System protects the arrow from being robbed of precious shot energy by rubbing on the rails. Zero friction means super-fast shots.

The HeliCoil Cams combined with the Frictionless Flight System makes 3-inch groups at 100 yards a reality with the Ravin 500E crossbow.

Tree stand and blind hunters will really appreciate the compact footprint of the 500E.

7.6 inches UNCOCKED! That’s smaller than many modern hunting crossbows are fully drawn! And at full draw the 500E creeps down to an axle-to-axle width of only 3.6 inches. Insane!

How Do You Draw The Ravin 500E Crossbow?

Is that a typo? Push-button draw?

No typo, it’s the real deal! The Ravin R500E features the new R.E.D.S. (Ravin Electric Drive System) allowing the shooter to not only draw the crossbow at the click of a button, but also uncock the crossbow!

Leave that goofy looking de-cocking arrow and annoying de-cocking target at home. With the R500 in your clutches you’ll be at full draw or safely de-cocked and ready to leave the tree with the push of a button.

And the process can be stopped and reversed mid-way. If you find yourself de-cocking the crossbow only to look up and see a booner headed your way, no worries. Simply hit the button again to reverse the draw sled and bring the RAVIN R500E Crossbow to full draw again quickly and easily.

Wow! It’s a great design that is extremely well engineered. The Ravin Electric Drive System features a removable motor and battery. Simply attach and detach as needed. This is a brilliant design as it keeps the overall weight of the crossbow down when not in use.

What is The Power Stroke Length?

The power stroke is 15″ with a draw force of 17 pounds.The overall length of the crossbow is 28 inces. 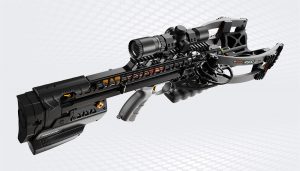 How Much Does The Ravin 500E Crossbow Weigh?

Weighing in at 9.9 pounds, the 500E is no Tiny Tim. Is this your best option for stalking thick brush in mountainous terrain? Probably not. Think of it more like a big, mean sniper rifle that shines when shot from fixed positions like ground blinds, box blinds and tree-stands.

Is The 500E Crossbow Inexpensive?

No! The price is not for the faint of heart.

Is it time to get a bigger piggy bank? Maybe. But if you’re in the market for a high-quality hunting crossbow with cutting edge features backed by a proven company you can trust, the Ravin 500E may be a match made in heaven. 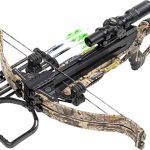